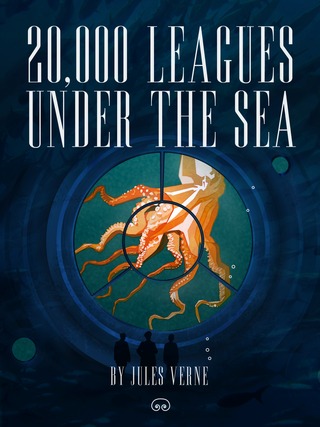 Perhaps we saw the 1950’s movie with Kirk Douglas, or maybe we had the snot scared out of us on the Disney World ride as kids-regardless, 20,000 Leagues Under the Sea is indelibly etched into the collective memory. The original by Jules Verne was published in 1869 when submarines where in their infancy: once again Verne predicts much of what will come technologically.

The crew of an American ship sets off to investigate a giant sea monster, only to find it, fight it, and then realize it’s a submarine. It’s called the Nautilus, and was built by the mysterious Captain Nemo. Fortunately he lets the multinational crew live long enough to go exploring with him. Until, like many mad scientist types, he gets bored of his quarry and goes a bit nuts. One last thing: don’t let the name 20,000 Leagues Under the Sea fool you. 20K leagues is over two and a half times the circumference of the Earth. The title refers to the total distance they traveled: 20,000 leagues. Enjoy!